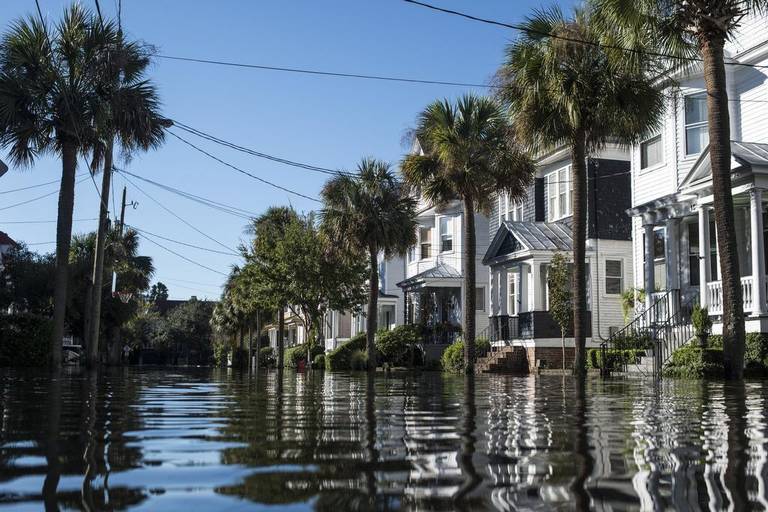 Coastal South Carolina leaders will likely have a new revenue stream for fighting flooding and sea-level rise caused by climate change thanks to a bill passed by the state legislature this week.

The bill — which would allow local leaders to access state accommodations, local hospitality and local accommodations tax dollars for public works projects to mitigate or eliminate effects of sea-level rise — passed the House Tuesday and Senate agreed on changes made with nearly unanimous bipartisan support Wednesday.

Those taxes, often referred to as “tourist taxes,” are added to prepared food and beverage, overnight stays in hotels and weeklong rentals. They’re mostly paid by visitors and represent multi-million-dollar revenue streams for destinations such as Hilton Head Island, Charleston and Myrtle Beach.

S.C. Gov. Henry McMaster is expected to sign the bill, which was passed the final day that state senators met in session, into law, according to his office’s spokesman.

S.C. Sen. Sandy Senn, one of the bill’s co-sponsors, celebrated its passage after years of efforts to make the additional funding available. A similar bill was introduced during the previous legislative session, but did not garner enough support to pass, she said.

“We have a lot of problems here, and this kind of money … will be able to make a huge difference, so (the price of making repairs is) not all saddled upon taxpayers in South Carolina,” the Charleston Republican said.

Senn was joined in sponsoring the bill by fellow Charleston senators Marlon Kimpson, a Democrat, and Chip Campsen, a Republican, along with Sen. John Scott of Richland County.

Charleston frequently experiences flooding during storms and hurricanes, something that has only increased in recent years. The city used to see flooding events about four days a year about 50 years ago, but during 2019, it flooded on 89 days.

Freeing up hospitality and accommodation tax dollars can lead to even larger funding sources for local governments, Senn said. If a local government applies for a municipal bond showing what they can collect in tax dollars, they can increase the money about ten-fold, she added.

“For Charleston, the accommodation tax is not small,” Senn said. “It can just really make a gigantic impact once it is multiplied with a bond.”

The bill’s passage comes as Beaufort County has topped the list of high climate change risks, according to an analysis released last week by ProPublica and the New York Times Magazine. Neighboring Colleton and Jasper Counties also made the list, which ranks counties across the country on how susceptible their residents are to “compounding calamities” due to climate change.

The legislation gives local governments, especially those on the coast that bring in millions in accommodations taxes each year, more flexibility in how they pay for projects that impact crisis response and residents’ quality of life. Stormwater drainage is crucial throughout the rainy summer season and during hurricanes on the coast, when well-draining roads and development can mean the difference between impassable evacuation routes and free-flowing traffic.

But most major cities in the state already have money dedicated to stormwater projects.

On Hilton Head Island, Town Engineer Jeff Buckalew said the town’s stormwater system is funded by a separate utility fee paid by residents and business owners via their property taxes. For most households, the fee is about $150 per year, he said.

“It’s nice to have alternatives but we’re already self sustaining,” he said of the bill.

Under the bill, though, funding for those projects could come from money brought in by tourists, rather than locals.

But the areas on the island most densely populated by tourism infrastructure such as paved parking lots and condominiums are the parts of the island that flood most frequently, because their surfaces don’t allow water to naturally drain into the ground. On Hilton Head, the busy Coligny Beach and rental-laden North Forest Beach areas are typically the most hard hit by coastal flooding.

“Hotel rooftops and parking lots produce more stormwater runoff than if the areas were densely forested,” Buckalew said. “Those types of land development projects serve tourists. So it’s not the tourists themselves but it’s the physical infrastructure on the land.”

Tax dollars freed up by the bill can be used make repairs or improvements to control flooding and drainage on tourism-related land, including addressing problems that cause road closures, storm-water drainage issues, and compromised public infrastructure. The money can also be used for demolition or construction.

Defining which land is “tourism-related land” on Hilton Head will be interesting, Buckalew said, because nearly the entire island is a tourist destination.

The money cannot be used on claims or lawsuits filed because of the flooding.

“We have an ecosystem that can be very adversely impacted by man, so we need to prioritize those dollars,” he said. “(This bill) allows for a broader community conversation about where the A-TAX dollars ought to go.”

But Sen. Kimpson said the state’s work on funding these projects is far from done.

“While this will bring in millions of dollars of revenue for some local governments, this is a billion dollar plus problem,” the Charleston Democrat said. “If we want a real solution, we’re going to have to use every tool necessary, including looking at subsidies form the federal government and our own state government to pay for it. We’re just kicking the can down the road.”

Still, Kimpson called the bill “a huge first step,” adding that this may be one of the biggest investments the state has made when it comes to flooding.

“This is a proactive solution to a growing problem that will only get worse as the climate continues to change,” Kimpson said.